Discussing The Importance of Values When Choosing Camp
May 19, 2017 by Camp Pages 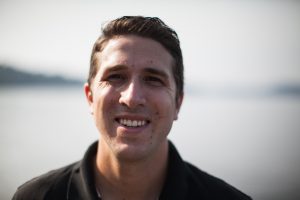 Q: How long have you been the director of Muskoka Woods?

I started coming when I was eleven and went all the way through and I’ve worked a number of summer jobs, but as the camp director, I came on July 2015.

Q: What’s your favourite part of your job?

You know, I believe in the vision because I was a product of it. Our vision is to inspire youth to shape their world and so I think the fact that I grew up in it is what I love about the job. I am passionate about our vision for what we hope to achieve. I also met my wife through Muskoka Woods and a lot of my best friends, my best man at my wedding. So, I think that just even the idea of being more than just a job, it’s feeling like it’s part of a community, a bigger community. I love that aspect of it.

Q: What is the best thing a parent or guardian can do to prepare their child for their first camp experience?

If a child is asking questions, if they’re asking about whether they want to go to camp or they’re wanting to go on sleepovers, wanting to go away, I think those are kind of little signs that say maybe they’re ready for camp. If they’re worried, which a lot of young people are – for some people, it’s the first time being away from their parents – I would say involve children in the process from the beginning. Right from the beginning, show them the website, watch videos… The reason I came to Muskoka Woods as a young person is because my cousins had gone there before and they showed me a video and I watched the video and went ‘oh my gosh, I have got to go to that camp’. Come up to camp; get a tour before the summer. I think the more you can involve them in the process, show them what the camping experience is like, the better.

Q: How can parents or guardians pick the right camp for their child?

I would start by looking at the values and visions of the camp. What are the values that each camp has? And say, ‘Do we align with that? Do we believe in that? Would we want to put our kid through that?’ Because if that’s the case, then that’s a great starting place. If you believe in the ‘why’, then the ‘what’ all of a sudden becomes a lot easier. Every camp also has something different to offer. Yes, every camp has a ton of activities. We have a ton of activities for everything whether it’s art or athletics, but for us, we value skill and growing in character. So, I would say start with the values and the vision.

Q: How can children learn or benefit from a positive camp experience?

Q: What advice would you give to parents whose children have had a negative camp experience?

What I would say is be upfront with the new camp or if you’re going to go back to the camp. Be upfront with them. If you’ve had a negative experience in the past, we actually want to hear about it, whether it was with us or with someone else, so we can pay attention to those things and kind of learn and know what happened. Call the director. Call me and ask to speak with me. Share your concerns. Also, involve your child. I think sometimes it can be easy to think ‘I had a bad experience, therefore, I’m going to try to quickly send my kid to a new camp’, but involve your child. If they’re not ready, then it might not be helpful to go too quick. You want to be patient. And the last thing I would say is bring a friend or a family member of the same age. If they had a previous bad experience, maybe coming with someone they already know, they’ve got a relationship with, that can help a lot.

Q: In your opinion, has the camp experience changed over the years and how?

Over the past several years, I think we’ve seen a decline in the camping industry in general. Numbers have sort of dipped a little bit and for us at Muskoka Woods, our response is creating city camp. We decided to bring the Muskoka Woods brand to the city, so kids could have this incredible camp experience, they could have a brand that parents could trust, but it would be from 9 to 5 and it would be close to home. Seeing the decline in the camping industry, our response was ‘let’s bring camp to home’.

Q: Is there a camper or instance you remember that really exemplified the power and spirit of camp?

There’s one person in particular, over a number of years. When she first started coming to camp, she didn’t want to come. Her parents said ‘this is going to be good for you’, but she was riddled with anxiety, somebody who was afraid to be around a lot of people at a time and was just very introverted and, like I said, high anxiety. [She] started coming, slowly and surely gained a little bit of confidence, was willing to come back the next year and the next year. Eventually, she actually did our leadership program which is a 4-week program and by the end of it, she was our valedictorian, nominated by her peers. She had to get up on graduation day in front of all the kids, in front of all the parents, and actually speak on behalf of them. And she did, which is amazing. And then she kept coming back – to the point where she became a leadership staff member and has grown in incredible ways. And actually, camp has helped shape even what she’s doing with the rest of her life. It’s actually helped guide where she decided to go to school beyond camp. And so that’s been a massive encouragement.