Camps that are Making Inclusivity a Priority
July 8, 2019 by Khyrsten Mieras 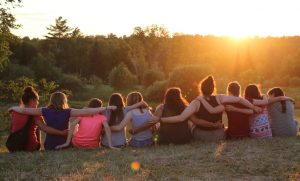 Camp is a time for kids to make friends, be themselves, have laughs and go on a ton of adventures. Just like snowflakes, every camper is different with different likes, dislikes and needs. Diversity allows us to understand that although people are different, that doesn’t stop them from becoming friends or having things in common. Inclusivity is extremely important when it comes to camp. Every child may be different but wants to have just as much fun as everyone else. Some camps pay extra attention to inclusivity to accommodate their campers from all backgrounds.

Sari Grossinger, Camp Director at Camp Robin Hood knows that inclusion is extremely important and wanted to have a diverse population that represents society. Inclusion has a positive impact on all campers and staff and is something that should be a social priority.

“Having kids with different kinds of needs being able to experience camp and what it has to offer is important to all kids. The more kids that we can expose to a camp experience, we’re hoping to build on confidence and independence,” said Grossinger.

Everyone wants to have a fun camp experience and feel included. Differences are what make us special.

“It’s nice for them to see other peers of the same age doing the same activities even if they’re not doing it at the same time. As we’re walking by everybody says hi to all the campers. It’s a benefit from the social perspective,” said Melissa Ray, Director at Camp Concord.

Mainstream campers also have a positive benefit when integrating themselves with campers with special needs.

“Kids that don’t have an identified need are also benefiting from the experience of having peers and staff from having additional needs. In society they are going to have to be able to learn and accept and work with everyone. What better place than camp to learn those skills. It’s also a place to build empathy and an inclusive attitude from an experience of having kids and staff integrated, said Grossinger.

Inclusion camps should mimic what the rest of the world is like. No one is the same and there are always opportunities and learning experiences to build social skills.

“Just because somebody has a neurological or physical difference, doesn’t mean that they should be treated any differently,” said Ray. “What makes us different is what makes us human and what makes us all live in the world together,” she added.

“The more we can help people be accepted and supported, the more we can make huge impacts in people’s lives and make them feel included,” said Grossinger.

“Inclusion for me in a camp environment is accepting everybody for what they have to offer, seeing what they have to offer, where their differences are and creating a program that builds them up but also supports them. It’s like having someone having a physical disability and having a canoe to accommodate them and can go on a trip with their neurotypical peers,” said Ray.