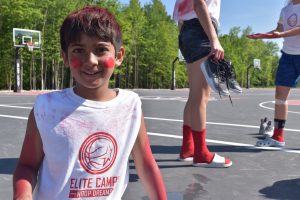 The Toronto Raptors had fans all across Canada on the edge of their seats throughout the season, but the stress and anticipation was well worth making history. The excitement from their win hasn’t slowed down at all. Weeks after the parade that stopped and took over the city, championship clothing and memorabilia are still being sold all over. Some players from the winning team have even started visiting basketball camps across the country soon after their championship win.

With kids out of school and eager to start their summer, many are off to summer camp. But one specific type of camp that has become extremely popular since the Raptors big win are basketball summer camps. Jey-son Edwards, executive director of Four Point Basketball training camp with several locations across the country says he’s seen an insanely significant increase in registration numbers. “65-75 percent increase for sure,” says Edwards. His camp is for ages 5-19 with a mission, “to provide hands-on structured basketball training, using a curriculum rooted in fundamentals and exceptional coaching, in a caring and positive environment.”

The Toronto Raptors have always had a loyal fan base but with the recent crazy season they had and with well known Canadian artists like Drake supporting them they have become bigger than ever. Everywhere you go you see Raptors gear at clothing stores, Ka’wine and dine stickers on restaurant doors, or stickers and flags on cars while driving, it’s clear that Canadians are proud and will continue to show their support for the reigning team. After all, Canada’s only NBA team beating 29 American teams is a huge accomplishment for not just the team but all Canadians.

Kevin Churchill, director of Hoop Dreams an overnight summer camp by Elite Camps says, “as soon as they made the finals it was a big deal, right away web traffic was up 80 percent.” Hoop Dreams is Canada’s first and only full summer overnight basketball camp. They have spent the last year and a half building a brand new camp site equipped with five new outdoor courts, a double indoor gymnasium along with a strength and conditioning room, as well as 10 new cabins with showers and bathrooms in each cabin, a new health centre, dining hall, climbing wall, archery range, and a fully functional waterfront with canoeing, kayaking, swimming, sailing, water skiing, and tubing. Churchill says they are getting between one to five new registrations a day which is unusual for this late in the season.

Although recent news of both Kawhi Leonard and Danny Green leaving the team has left fans saddened they sure won’t stay that way for long and are already getting ready for the next season to start. Eight-year-old Ethan a camper at a Nike basketball camp run by MPG Sports in Ajax, ON says he’s not mad that his favourite player Kawhi is leaving, because he wanted to be closer to his family and Canada was too far. But all the campers agreed that the Raptors will still win next season.

Canadians are sure making their mark in the NBA and are showing off their skills. The hype of the Raptors winning the championship title and making history continues to live on everywhere, and who knows some of these campers could be playing for the Toronto Raptors someday.