Replacing Technology With the Outdoors
July 12, 2019 by Kaitlin Balram 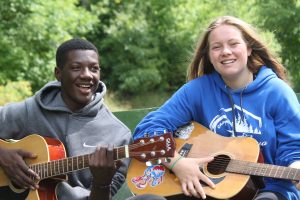 Fresh crisp air, birds chirping, and the sound of children’s laughter create the scene for the first day of summer camp. Kids running around excited for the week ahead. Eager first timers exploring around while the more comfortable campers help. Canoeing, kayaking, swimming, and crafts fill the void of not having technology.

For many overnight camps cell phones are on the “do not pack list.” This allows campers to fully embrace the outdoors without electronic distractions. Instead of staring at a screen they can enjoy face to face interactions.

In today’s society majority of people are glued to their phones at all times. They’re on it when they wake up until they fall asleep, even in bed they’re sending their last email or checking social media.

Studies have shown that technology can be good but can also have negative impacts especially on developing children. Cell phones have become an important topic of concern at schools because teachers are having a hard time competing with phones.

Andrew Martin, director of Camp Can-Aqua says, “on the first day, any phones at camp are taken away and stored in the office until the end of session.”

This rule also applies to counsellors but according to Martin, “it is a bit slippery though as for some programs they need music, and phones are also now their stereos. On these occasions, staff are permitted to sign out their device, providing 1. They turn in their sim card and 2. It is a program approved for use of their music.”

This rule prevents the issue of counsellors having to fight for the attention of their campers. Many campers would agree that not having their phone makes their time at camp much more enjoyable and a lot less stressful.

Some might argue that technology is part of our society and we should embrace it but Martin has a good reason why at his camp he doesn’t allow them.

I don’t allow technology at camp because in my opinion, technology serves to withdraw us from social opportunities.”

For example, Martin referred to being at a cocktail party or at a restaurant. “You’ll see people clicking on their devices. Technology is an additive thing that serves as a crutch in social scenarios.”

By not allowing phones campers can connect with one another and engage in conversation without being distracted. There are so many experiences to be had at camp whether it’s making lifelong friendships, spending your first night away from your parents, roasting marshmallows by the campfire or staying up late laughing with your cabin mates.

Critical social skills such as cooperation, compromise, and empathy are skills that can’t be learned through the use of electronic devices, said Martin.

Campers learn many other skills as well. Learning how to kayak or play archery among others. Some find their niche in a specific activity and continue to play outside of camp.

Although there are an overwhelming number of positives with not having electronics at camps some campers still miss them so much so that they need to go home, said Martin.

But, for the most part Martin said, “campers understand it and appreciate it, honestly. New campers learn from returning campers and they too are quick to adjust. It really depends on the boundaries that their parents set when at home.”

Martin said that by leaving technology at home campers gain “a small window of time where they can be present in the world. We’re all subject to overstimulation and information overload. For the time kids are at camp, they get to take deep breaths, overcome their social fears and discover that human relationships and social interaction, while challenging at times, are far more satisfying than those they build online and through social media.”

Going to camp is a time to grow and find yourself. In order to fully engulf yourself in the experience, leaving technology at home is key. It’s a place where the amount of likes on a picture and number of followers doesn’t matter. Campers are able to make friends without a preconceived idea of them from social media profiles. Everyone starts off the same at camp with a bag of clothes and the hopes of having a great, memorable time.